The Boy. The Manager. And the Lady. 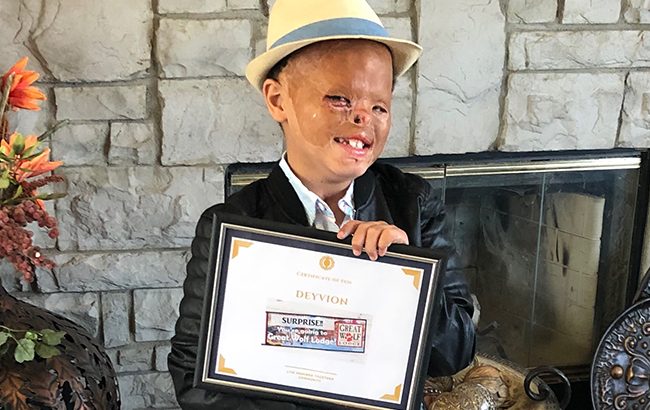 The story of this boy, manager and lady is an example of John O’Leary’s Live Inspired Community changing the world, starting with their own.

“Yet no life has ever been improved through indifference.”

But as I was reminded last week, the most effective, transformational and life-giving leaders are the ones who respond and pay attention. They are the ones who step up and step forward. And, they aren’t always the individuals you thought they’d be.

Last week, I wrote about a little boy who was burned terribly as a baby; and how his story, scars, courage and brilliant smile sparked something in me.

What began as texts with Deyvion and his mom has turned into a special friendship. I feel blessed to know, respect and love them.

Deyvion, now eight, has had a difficult time lately.

He had an arduous surgery recently and has another scheduled this Spring. During times of difficulty, it’s encouraging to have something exciting to look forward to, isn’t it?

So, I asked his mom to share a dream of his. She shared that something he’s always wanted is to just be a normal kid for a day. He imagined a day at the waterpark, playing with other kids and spending the night with his family in a hotel.

I knew we could help make this dream a reality.

Because it’s encouraging to have something to look forward to during difficult times, the Live Inspired Community rallied around our friend Deyvion.

I called the manager of a phenomenal waterpark resort. My message shared the struggles of this child, the dream he’s had and asked for help in making a special experience possible. We wanted to remind him that he is loved and this gift would demonstrate just how much people care.

There was no response.

About a week later, I tried again. No response…

So I tried again. And again. (Years of therapy as a kid resulted in dogged determination!) I left messages that anything they did we’d celebrate with our community of a few hundred thousand friends and that if they couldn’t do anything we’d understand and personally buy the gift certificate.

I never heard back. Believe me, I get it. We’re busy! There are rooms to book, employees to lead, revenue targets to hit and a life to live.

But there was also a kid in need.

Knowing that I was traveling to make a surprise visit at Deyvion’s house and needed something to share with him that he could look forward to, I skipped calling the manager an eighth time and just rang the front desk. A woman answered and I shared the story of the little boy, his dream and what we were trying to do.

She very quickly replied, “I want to help you. I’ll get the room for the family and the passes for the park.”

John O’Leary’s Live Inspired Together Community is changing the world, starting with their own.

I asked if they had a program set up that could comp this?

“No. I’ll be paying out of my own pocket. But it would be my honor to do it.”

The following day, I drove to the waterpark, delivered a massive bouquet of flowers to her and thanked her for answering the call. I told her that, although we could not allow her to personally fund the trip, her willingness profoundly moved me and my team.

The following day, a little boy opened the door and was shocked that John O’Leary was there. He was speechless when I handed him a framed certificate that represented the dream of his day at the waterpark.

I got the hug from Deyvion, but it was for our entire community.

The remarkable, humble, generous woman (who asked to stay anonymous) picked up the phone and answered the call. She made a difference for someone else. She is just one example of the amazing things our live inspired community members – YOU and all 300,000+ friends around the world – are doing. Changing the world, starting with our own.

She was unquestionably successful as indicated by the absolute delight on Deyvion’s face holding his certificate. My friends, the generosity of others constantly amazes me. I notice often that those who seem to have less are the first raise their hand, step forward and make the difference.

It’s common to ignore the need, not respond and remain passive, indifferent, busy.

Yet no life has ever been improved through indifference. Our lives change, and the lives of those around us are elevated, when we pause from the urgent and trivial busyness of the day to pay attention to the important and the relevant.

It’s a call worth answering and a message worth returning.

If you liked this story of how one small act of kindness can change the world... you'll love hearing my interview with 'The Kindness Diaries' star Leon Logothetis. Click this box to link to episode 136 of the Live Inspired Podcast.

6 replies on “The Boy. The Manager. And the Lady.”

How inspiring! Thanks so much for sharing. Jesus is shining through this special lady and all that you do to bring Goodness!

A wonderful story John. I’ve had similar experiences about being ignored when we are trying to help very deserving Veterans. AND your response to the lady as well as Deyvian makes you a very exceptional, loving human being!

What a beautiful story for a Monday morning! John and the team…..you are amazing for the simple examples of “doing what Jesus would do” in our world today and providing me with hope for humanity today. Your stories of people taking God’s love out into the world and sharing it with others really is an inspiration to me and all who know you. Thank you for the reminder of what persistence, dedication, energy, love, kindness, and generosity can do, starting with one person at a time.

What a beautiful story. And in the age of overwhelming levels of communication, this really hits home. One person- John- was determined to help another person- Deyvion- with the help of another engaged individual- the woman who answered the phone. God bless you all.

John, I’ve been hanging around your written words for a while now. Awesome stuff yet you really nailed me on this one. I mean…HOW can any sound-minded adult NOT feel the nagging injustice of Deyvion’s unfulfilled dream especially when it is so simple & attainable? Then it happened…I felt my indifference To Deyvion settle in as it has so many countless times in the past. Then I looked at Deyvion’s photo seeing the joy & pride and was deeply humbled/embarrassed. The upshot is that today I’m going to find someone (or a cause) like Deyvion and get involved in making that person’s life better. There is no higher purpose than that and its time I paid forward for the countless times I’ve received assistance when in need. John, thank you for providing the fuel I needed to step away from the convenience, comfort & ease of my life to actively seek out how I can attend to the suffering & need of another(s). John, thank you for being insatiably generous with your mission in life, I’m now on the team.

Beautiful gesture from you and the lady. Shame on the park for not responding nor comping the experience.