Skip to content
Home | Blog | The One Thing You Need to Overcome Adversity
Monday Motivation | June 21, 2021

The One Thing You Need to Overcome Adversity 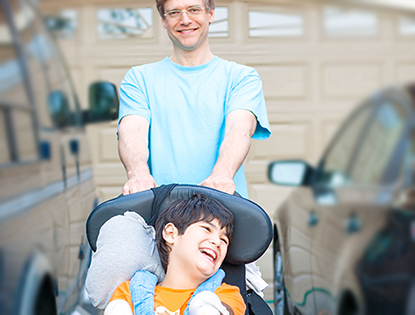 John O’Leary reveals the one thing you need to overcome adversity.

“Love… is the fuel that overcomes the fear of penalty; moves the obligation of duty into opportunity to serve others; is energizing and never ends.“– Edie Varley

These are some of the characteristics required to overcome adversity, take the next right step forward and thrive in life.

Yet, beneath those brawny traits exists a singular, common denominator, liberating us to overcome personal adversity, unite with others, and become far better versions of ourselves: Love.

Love transforms brokenness into unity, despair into hope, and deficiency into perfection. Love allows us to rise above our challenges – and it empowers us to help others rise above theirs, too.

Few understand this truth better than the Hughes family and their son, Patrick Henry.
Born without eyes, and with arms and legs that would never fully function, Patrick Henry Hughes entered this world with far more challenges than most.

Although Patrick Henry was destined to spend his life in darkness with significant adversity, his family refused to let him be defined by the things he could not do. Instead, they chose to celebrate the many gifts he possessed, rejoice in the life that was perfectly his and stoke his greatest passion: Music.

This father exemplifies the one thing you need to overcome adversity.

Even from his earliest days, Patrick Henry exuded a deep love of music. He took to piano early and by age two was taking song requests from friends and family!

As he grew, Patrick Henry expanded his skill and began to play the trumpet. By high school, he was so gifted that he was invited to be part of the University of Louisville marching band!
But how could a trumpet player who is wheelchair-bound and blind possibly join a marching band?

Patrick Henry had a father who loved him well.

Patrick John challenged his son to continually grow personally and to never make excuses. When presented with the opportunity to join the band, he encouraged his son to go for it and did everything imaginable to support that effort.

He worked the night shift in order to go to class with Patrick and went to class with him to helped take notes. Patrick John took his son to daily marching band practice, learned all the steps and pushed his son’s wheelchair so that his son could march with the rest of the band.
In other words: Patrick John loved his son.

It turns out love allows each of us to discover strength we never knew we possessed, the ability to impact in a way we never knew we could, and the potential to change the world one life at a time.

The one thing you need to overcome adversity and how to ensure you find it.

My friends, as we march into summer, let’s focus less on the challenges we face. Let’s focus more on celebrating what the opportunities we possess, those marching with us and the remarkable chance to be part of this orchestra of life.

And belated Happy Father’s Day to all the dads and father figures who have stood behind us and pushed us forward. They remind us that life is far less about which instruments we were given and far more about choosing to create beautiful music with the ones we’ve received.

This is your day. Live Inspired.
John O’Leary

4 replies on “The One Thing You Need to Overcome Adversity”

Love this John, and Happy Father’s Day to you!

John, THANK YOU for another spectacular Monday Motivation—a perfect reflection for the day after Father’s Day, and a fabulous inspiration for every day! I will share it, of course.

John
Thank you for another great Monday
motivation.