Skip to content
Home | Blog | Many Hands for Haiti Founder Shows: One Person Can Make a Difference
Monday Motivation | August 30, 2021

Many Hands for Haiti Founder Shows: One Person Can Make a Difference

John O’Leary shares the story of Tim Brand, Founder of Many Hands for Haiti, and reminds us that we one person can make a difference.

After yet another catastrophe devastating our neighbors in Haiti, I wanted to share with you the amazing work being done by an organization striving to make a difference there.

The following story was shared with me on my Live Inspired Podcast by my special guest Tim Brand, Founder of Many Hands for Haiti. They are making a profound, positive impact during a time when need is so overwhelming. It’s a message that will remind you of the ripple effect of your life. Even when you don’t see it:

This man’s perseverance inspired a movement decades later that has impacted countless lives of people in Haiti.

Ralph had the world in his hands.

At 36 years old, he had three beautiful and healthy daughters, a wife by his side, owned a grocery store with his brother-in-law, and a house to call his own. With a singing voice to die for and a jokester, joyful spirit, life radiated from his being.

Then one day, he had a headache.

It got worse and worse, until he ended up in the hospital. He went into emergency surgery, as a blood vessel had burst in his brain and he was hanging on by a thread. To stop the bleeding, the doctors had to tie the blood vessel in a knot, leaving the left side of his body completely paralyzed. The year was 1958 and Ralph was my grandpa.

Upon waking from surgery, he was told he would never live a normal life again. He wouldn’t be able to walk, hold a job, and would be bed-ridden. His wife had to sell the business, as there was no way Ralph would be able to contribute to making it profitable. Darkness set upon the family, and hope was hard to come by. All seemed lost.

But, the doctors didn’t know my grandpa. After a few dark years, he taught himself to walk again, even with the left side of his body completely paralyzed. He would take one step forward with his good leg, then drag his bad leg in front of him and use it as a crutch, and take a small step forward.

He dragged himself around like this for almost 40 more years.

During this time, he held a full-time job as a county auditor, learned to drive a car, played golf with one hand, went hunting, and was an elder in his church. He ended up having nine grandchildren, of whom he took golfing, did joint wood-working projects, and went on family vacations.

On January 10, 1998, at 75 years old, my grandpa suffered a massive stroke. It was my senior year of high school, and before this, he rarely missed a sporting event, always sitting in the front row of the bleachers. He wouldn’t make it back to another game. The stroke didn’t take him all at once; in my grandpa’s typical fashion, he wasn’t going easily. But, it was clear that he wasn’t going to recover, either. When things were headed downhill, I remember walking into his hospital room and at that point, Grandpa couldn’t talk. He could just blink.

I held his hand, got right up next to him, and told him that I loved him and would never forget what he taught me. He looked at me intensely and blinked repeatedly. He didn’t need to say anything. We connected, and we both understood. I will never forget those eyes.

Working in Haiti is hard.

Beyond a shadow of a doubt, this is the hardest thing I’ve ever done. I’ve been ridiculed, persecuted, and threatened. I’ve seen and experienced things that break my heart over and over again. Whenever I doubt myself and I want to stop running the race before me, I remember my grandpa. I see him dragging his leg, walking when no one said he would ever walk. I remember his eyes blinking at me, telling me he loves me and is proud of me. My grandpa persevered against all odds.

This week marks the 20th anniversary of my grandpa no longer dragging that leg and running into the arms of Jesus. My grandpa never stepped foot in Haiti, nor was he around on my first trip. But, Many Hands stands on his shoulders; his character and perseverance runs through the heart of our organization.

So let us run with perseverance the race marked for us. Let us never grow tired and weary of doing good in this world.

Tim reminds us through his story – and his grandpa’s legacy – the need is great. The time to act is now. 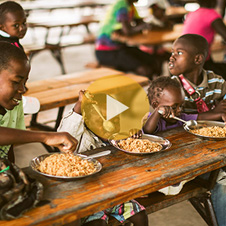 Tim reminds us through his story, and his grandpa’s legacy, there is great need. And the time to act is now. Hear his story, learn more about the impact of Many Hands for Haiti + how you can participate on my recent Live Inspired Podcast ep. #388. Click here to listen now.

1 reply on “Many Hands for Haiti Founder Shows: One Person Can Make a Difference”

John,
This is just overwhelming to me as what perseverance your grandpa had and not to give up and the Lord is expecting that of each of us during this life. Our doctors know about Haiti as we have a hospital there and the country is so devastated I pray each day that like your grandpa the Haitians just never give up hope!