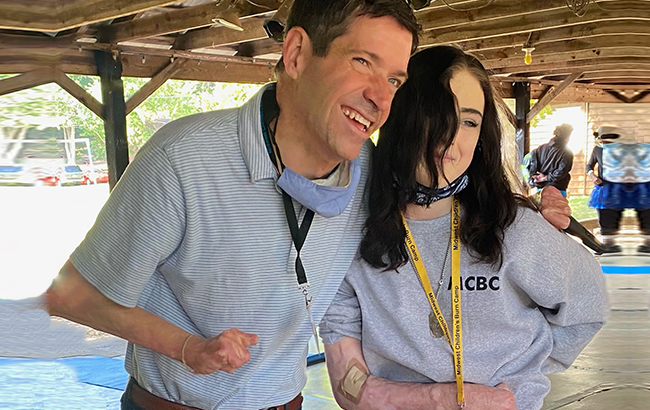 John O’Leary helps us identify what matters most.

Two weeks ago, I had the opportunity to speak at a sold-out event, in a magnificent room, with contagiously passionate energy exuding from all those gathered. The audience was so enthusiastic they gave me a standing ovation as I took the stage – I told them they may regret that after hearing me speak!- and another when I finished speaking. Afterwards, there was a long line for book signing with plenty of elbow bumping and vulnerable sharing.

It was truly a wonderful event.

And yet, in processing my day during the drive back to my family that evening, it wasn’t the big event I kept thinking about. It was instead the seemingly far less significant meeting on the way to the big event. Let me explain.

A couple hours earlier and a hundred miles away, I met with one very special girl.

I had originally met her a few weeks earlier at a burn camp for children. This courageous young girl was burned years earlier, sustained injuries similar to mine, and had lost the fingers on her right hand. Because of that, she wore an oversized sweatshirt at camp to cover the scars on her arm and hide the extent of her injuries.

You don’t have to be a child to know sometimes it feels safer to simply hide scars.

At camp that day, I shared with the kids what I went through as a child and the gifts that came from it. I reminded them of the beauty of scars, the resiliency they possess, and ultimately, that they are being prepared for something bigger and better than they can currently fathom.

Afterwards, this beautiful girl approached in her sweatshirt. She stood in front of me, took a deep breath, then exhaled as she rolled up her sleeves for the first time that week. She then proudly lifted her scarred arm and hand.

You don’t have to be a child to know sometimes it’s liberating to honestly reveal your scars and embrace who you really are.

As we hugged goodbye at the end of that meeting, I told her we weren’t done being friends and the next time I was in her part of the state we were hanging out.

That’s how a few weeks later, at a little restaurant off the interstate, I had the pleasure of reconnecting with this brave girl. Her grandfather sat nearby as we visited about her experiences, what she had endured, the struggles she faced in recovery, the concerns she felt moving forward and the dreams she still had for her life.

In other words, we had an awesome visit!

That interaction, with that young girl, reminded me it’s seldom in the massive events and huge gatherings where we change the world. It’s the regular moments, in unexpected spaces, with ordinary people that the best of our work and lives is revealed.

Too often, we race to what we thought was the real work, but it’s seldom found in the big stuff – the big trip, the big project, the big win.

No, the best and most meaningful aspects of our lives are discovered in the seemingly ordinary experiences, tender moments of grace, and ordinary human interactions with others throughout the day.

Today, as you prepare to sprint into your day, land the mighty projects, race the kids out the door, or successfully check off that long to-do list, don’t miss the fact that the real gift of this day isn’t found in getting through it.

The best of this day will be realized in slowing down long enough to savor the experiences, conversations, and moments that actually matter throughout it.

7 replies on “The Real Work”

Thank you for sharing your experiences. I have your books Fire & Awe. Excellent

We forget that the little things(random acts of kindness) mean so much to someone having a tough day. Thank you

It’s true that many of us race through life in such a hurry that special moments go unnoticed. Thank you for the reminder!

Such a moving article and not soon forgotten.

The compassionate calling of a Phoenix, lifts and inspires others to shine and soar. Thank you John for all you’ve chosen to magnify and share – grateful for those gifts.

This story really touched my heart.

I liked your thoughts. I saw you speak a few years ago in North Dakota; and have gotten your on-lone messages since; which have helped me. Thank you.