What Makes Us Human 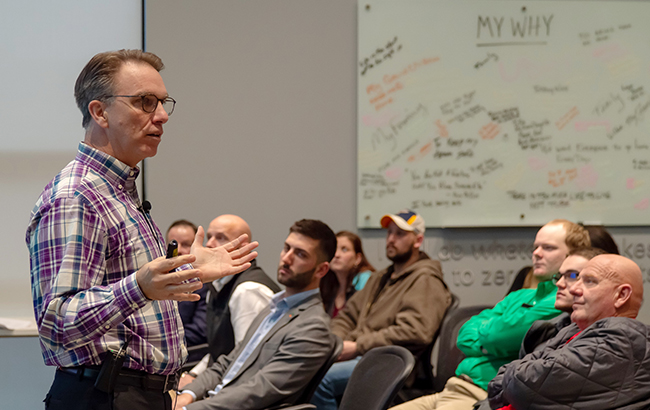 When fires ignite, cancers attack, or tragedies strike, we lean into our community for support, prayers and love. But often when the invisible challenges of depression, bipolar disorder, or mental illness arise, we feel we’ve got to quietly shoulder the weight alone.

September is Suicide Prevention Awareness Month. And because my family, the families of my co-workers, and the families of innumerable friends have been directly impacted by both mental health challenges and suicide, we wanted to bring to light what too often remains castigated to the dark.

My friend Dennis Gillan understands both that darkness, and the profound need for light.

Dennis and his four siblings were raised in an idyllic community just outside of New York City. The streets were packed with other children, summers were spent playing ball outside and they only went home when mom called them in for dinner. They were days filled with laughter, play and life.

And yet, Dennis’ family struggled quietly with depression.

During his first year in college, Dennis received a call that his older brother, Mark, had been in a car accident. The brother that taught him how to ride a bike, throw a ball and climb a tree had died.

Upon arriving home, Dennis learned the even more painful truth regarding the circumstances of the death. His brother’s car didn’t hit another vehicle or strike another object. In reality, his car never even left the garage. It wasn’t an accident; it was suicide.

Unsure how to process this loss, the family kept the agony and the emotions bottled up.

They rarely spoke of the Mark’s death, the struggles he’d quietly shouldered alone, or the insurmountable pain of losing him. They buried Mark, and the pain, and just moved on.

Nine years later Dennis received another phone call that would again change his world. His younger brother Matthew, the kid he had taught to ride a bike, throw a ball and climb a tree, had also died.

Dennis was overwhelmed with grief.

He remembers being in a thick fog at the funeral, completely unmoored and disengaged during the following week with his extended family. Dennis was furious about all he’d lost. He was scared for his own life.

He remembers the long drive home with his wife a week after Matthew’s funeral. He could not fathom moving on, going back to work, and pretending as if everything was going to be fine.

And he vividly remembers dreading that after being gone for more than a week he’d be returning not only to a life that would never again be the same, but to a yard certain to be in need of maintenance. It may seem insignificant now, but with the dense fog of sadness already enveloping him, the very idea of having to cut the grass after the long drive almost broke him.

As he and his wife pulled onto their street, they noticed immediately the grass had been neatly cut, the weeds pulled, the driveway swept. There were fresh flowers on the front door, coolers loaded with meals and a pantry filled with food. The neighborhood had come together to lift up this family that had lost so much. No, they couldn’t change what happened in the past, but these neighbors were there for support going forward.

He parked the car, put his head down and wept.

Dennis began to realize he didn’t have to do this alone. He sought a counselor and joined a support group. He began processing the losses, stopped self-medicating through drinking, and unashamedly started asking others for help. Dennis committed to not only choosing a different path than his brothers, but to making sure their lives weren’t forgotten and their deaths weren’t in vain.

More than two decades after the deaths of his brothers, Dennis uses those painful losses as motivation not to mask up emotions, but as fuel to encourage others to share their struggles. He wants to utilize conversations about his brothers as a reason to talk about suicide and mental illness.

Knowing that more than 1,000,000 individuals attempted suicide last year, that mental wellness requires far more attention and that only 1 in 5 men with depression actually seek help, Dennis wants to champion greater awareness and action. He encourages others to be real, to seek help, to not hide and to vulnerably lean into others.

(Dennis was my guest on the Live Inspired Podcast. In an emotional, vulnerable, and beautiful conversation he shared his life story – and how we can better live our life stories. Check it out here.)

When fires ignite, cancers attack, or tragedies strike, we lean into our community for support, prayers and love. Let’s agree that when invisible challenges such as depression, bipolar disorder, or mental illness arise, we’ll ask for help, too.

Asking for help doesn’t make you weak. It makes you human. And might just save a life.

2 replies on “What Makes Us Human”

What an important message…so beautifully conveyed. Thank you.

This story could be used in day 2.