Are You Fighting a War Already Lost? 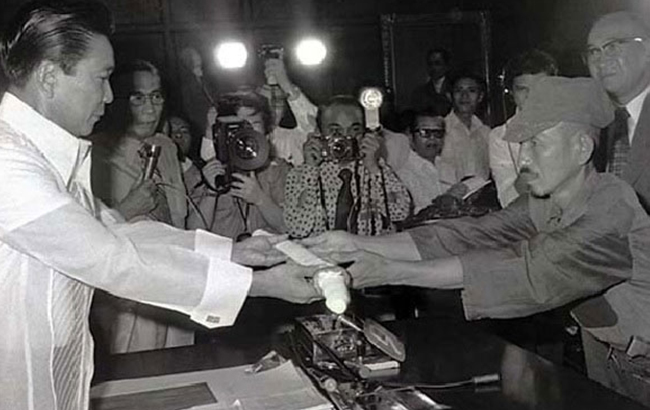 What the story of Hiroo Onoda can teach us about the importance of surrender.

When we’ve experienced the sharp disappointment of being let down by others, when is the right time to accept what happened, embrace what is and move forward into what could be? Although debating exactly how long holding onto righteous anger is understandable, the example of Hiroo Onoda demonstrates the dangers of clutching it for too long. Let me explain.

Hiroo Onoda was born into a Japanese military family in 1920. With World War II raging, at age 18 he enlisted to fight for the Imperial Japanese Army Infantry.

Becoming a commando, in 1944 he was sent to the island of Lubang in the Philippines and ordered to take a defensive position, to not surrender and to fight until the end of the war.

The following year, in February of 1945, American Marines landed, swiftly defeated the Japanese on the island and accepted the surrender of most of the surviving Japanese fighters.

Most, but not all.

Onoda and three others refused to surrender. They retreated higher into the mountains, deeper into the jungle and awaited reinforcements to continue the fight. Seven months later Japan officially surrendered and the war was over. The agony of war finally ended; a rebuilding process began for Japan and the entire world.

Except for four Japanese soldiers on Lubang Island.

Living off bananas, coconuts and stolen livestock from nearby farmers, they continued the war.

Undeterred, the men conducted guerilla warfare. They attacked nearby farmers and villagers assuming they were simply following orders. Over the course of years, the men burned innumerable houses, destroyed fields of crops, and killed almost three dozen locals. Eventually, due to death, capture or desertion, Onoda was the last of the four.

A single soldier, fighting a World War, by himself, for the next three decades.

Imagine that: Three decades of fighting a war that had already ended.

Finally, in March of 1974, the Commanding Officer who decades earlier gave Onoda the order to fight until the end of the war flew from Japan to Lubang. He made his way deep into the jungle, tracked down Onoda and shared that indeed the war was over. He relieved the soldier of his duty, accepted his sword and rifle and told Onoda it was time to go home.

Three decades after the war ended, Onoda was finally free of the burden of fighting.

But don’t think for a moment that only a forgotten soldier on the island of Lubang continues fighting a war that’s already ended. Senseless grudges from the past and ignorant hostilities in the present continue to sow anger between nations, political parties, and religious fractions. The inability to learn from the past, extend grace in the present and move forward together frequently divides neighborhoods, offices and families.

So what do we do with the sharp disappointment of being let down by others? When is the right time to accept what happened? And when is it appropriate to embrace what is and move forward into what could be?

It’s certainly easy to identify the ludicrous foolishness of a Japanese soldier fighting decades after the war had ended. It’s far more difficult, far more important and ultimately far more liberating to acknowledge there are battles in our own lives we no longer need to wage.

Perhaps it’s time to raise the white flag of surrender and find freedom from fighting a battle that’s already concluded.

7 replies on “Are You Fighting a War Already Lost?”

This is so interesting and disturbing. It seems that these four men who essentially were living in isolation, lost their minds. I think isolation can produce irrationality & craziness. It shows that was we allow ourselves to think, either negatively or positively can affect our entire life. Oh the years that were wasted when there were plenty of signs showing them the war was over.
A good reminder to me of the “cancer” that holding a grudge or anger can do to a person. It truly is like a disease.

Your point is well made here John, and I love it! However, I don’t know that I would refer to Hiroo Onoda’s continued fight as “ludicrous foolishness,” as he steadfastly fought for what he believed. Perhaps there is a way to characterize this unenlightened perspective without suggesting he was a fool. In many respects, his unwavering devotion to duty and cause can be admired. Again, I agree with you thematically, but might find a different way to describe Mr. Onoda’s perspective.

A dear friend and I had a disagreement which ended with her hanging up on me. Although I didn’t think it was a big deal, the more time passed the more awkward it felt to reach out. After three years I finally “raised the white flag” and wrote a letter. What did I have to lose—that my friend would not speak to me for years? It turns out that she too wanted to reach out and did not know how. Our friendship is now stronger than ever.

What a great message! To hold on to bitterness has a negative impact on the person holding that bitterness an holds them back from the freedom of totally enjoying “the journey”. There is an old saying that says “Anger rusts the container that holds it”

Thank you for helping me live inspired!

So necessary to moving forward.

Thanks John. I took my brother and his wife Cindy and my wife Judy to St Thomas in the Virgin Islands. Trying to surrender what happened to my mom to God and Move on.