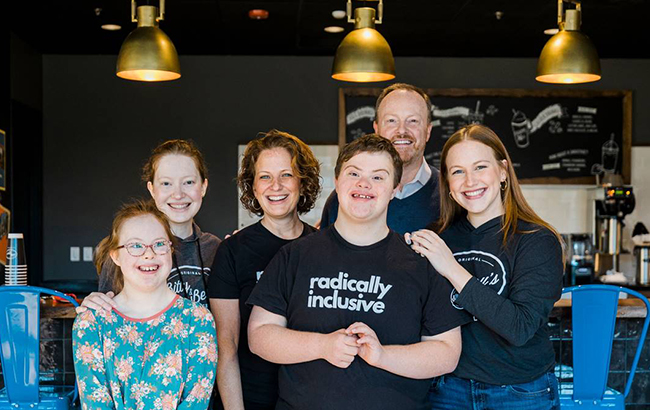 “The beginning of love is the will to let those we love be perfectly themselves, the resolution not to twist them to fit our own image of perfect.”  -Thomas Merton

To celebrate World Down Syndrome Day today I wanted to share a story of a family who received a diagnosis they didn’t desire…and ultimately a gift far greater than they could have imagined.

Life was going perfectly for Amy and Ben Wright.

They enjoyed work that provided meaning, an adopted city they loved, and two healthy children they adored. As good as things were, their joy expanded with the birth of their little boy, Beau. Life was perfect.

Amy remembers the phone call that changed everything. In the first few months after his birth, Beau seemed to be progressing a bit slower than her other children. After several tests, their pediatrician called to inform the parents that something was wrong with their child. There was an abnormality with the child’s 21st chromosome. Beau was diagnosed with Down syndrome.

News spread quickly. Sympathetic encouragement arrived in the form of flowers, cards, and meals. One well-intentioned neighbor brought Amy dinner, gave her a mighty hug, and shared how deeply sorry she was for this burden on their lives. The diagnosis was treated like a funeral.

While the two ladies cried together on the stoop, Baby Beau, unaware of the bad news, slept peacefully in his room.

While raising Beau was perhaps not as easy as their older children, Ben and Amy realized quickly that far from an imperfect burden, little Beau was an unexpected, delightful gift. He exuded curiosity, had contagious enthusiasm for life, and demonstrated persistent joy best seen not just in his smile, but in his eyes.

He taught them to not take things so seriously, to always find an occasion to laugh. He revealed how easy it is to connect with others when not concerned about how others might judge you. He tended to embrace every person they encountered and while it took some getting used to, and a few explanations, it also provided countless opportunities to make new friends.

Far from burdening the family, in many ways he actually liberated them.

As Beau continued to grow, learn and teach, his parents received another unexpected gift: Amy was pregnant with their fourth child. Because of certain risk factors in the pregnancy, they ran a battery of tests on the child.

Amy still remembers exactly where she was when her phone rang. The physician spoke slowly, solemnly, reminding Amy that because of Beau, they knew there were inherent risks in another pregnancy. There was a long pause, before the physician added, “Amy, your fourth child is a little girl, but she’s also going to be born with Down syndrome.”

Far from the tears of sorrow they had shed years earlier, the Wrights now knew the gift they had just received.

Yes, they were aware of real challenges. But their son had taught them things about love, joy, smiling, and dancing they’d learned from no one else in their lives. Beau had taught them the value of embracing others, pursuing real success, and celebrating all the little things in life.

Now they’d have a little girl named Bitty to raise up and to learn from.

She didn’t win for simply being a terrific lady, a brilliant example to the rest of us, or an outstanding mom raising four kids, two with special needs. She was nominated and won because of a coffee shop she opened in Wilmington, NC called Bitty and Beau’s Coffee.

Here they serve great coffee, lots of smiles, and plenty of hugs. And that original coffee shop in Wilmington has grown to 23 shops across 12 states.

The success of Bitty and Beau’s Coffee hinges on their employees. And with dozens of employees with intellectual and developmental disabilities in each shop, who better to teach the rest of us to take a sip, wake up and savor life?

Amy Wright closed her acceptance speech for the 2017 Hero of the Year award by speaking directly to her children. She shared these words: “Bitty and Beau, I know you are home watching this live…I need you to know that you are perfect…I would not change either of you for the world, but I would change the world for either of you.”

My friends, Amy and Ben Wright are changing the world.

One perfect life at a time.

Changing your world requires the decision to move away from wishing that it was easy, and instead deciding to make it better.

It requires shedding tears not only for all that was lost, but for all the gifts received.

And it demands loving others perfectly as themselves, rather than twisting them to fit our own image of perfect.

This is your day. Drink it up and live inspired. 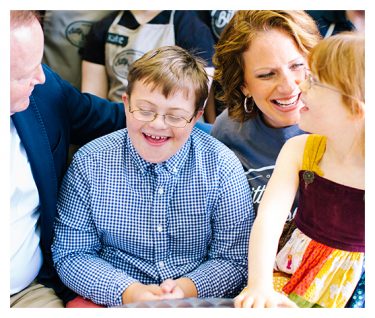 In honor of World Down Syndrome Day today, I encourage you to revisit my conversation with Ben and Amy on the Live Inspired podcast. They shared their story, the reason for their joy, and encouragement on seeing perfection in your life. It’s one of my favorite podcasts to date, and will be yours, too. Listen here!

3 replies on “Change the World”

John, I look forward to your stories. They keep life in perspective and remind us to smile. Thank you.

What a beautiful story, thank you for sharing John.

What a wonderful story. Creating Awe and inspiring and challenging us to be better and love