Hope After the Storm 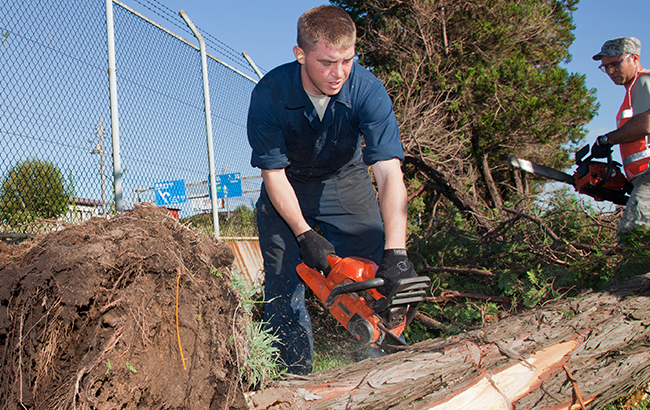 How do you respond when tragedy strikes?

“Resilience is accepting your new reality, even if it’s less good than the one you had before. You can fight it, you can do nothing but scream about what you’ve lost, or you can accept that and try to put together something that’s good.”  -E. Edwards

As the result of powerful Spring thunderstorms, sirens sounded in our hotel recently encouraging us to seek shelter in the basement.

While waiting for the storm to pass, the all-clear to be given, and the right to return to our rooms to be granted, I was reminded of the powerful, unmistakable sounds many report as a tornado approaches and after it departs. Let me explain.

Many survivors of tornadoes share that as the storm approaches there is the piercing sound of a freight train. And that after the massive, unsettling locomotive sound fades, it is followed by an eerie momentary silence, which is quickly broken by the powerful sound of chainsaws.

Clearing debris from houses, removing branches from roadways, seeking to rebuild by first removing the damage. It is the sound of a community that has been badly damaged and is already beginning to rebuild.

Though not a tornado, enduring a painful storm, its devastating effect, and the subsequent beautiful sound signaling the beginning of healing has been witnessed by our family, too.

Years ago, on a gorgeous Sunday afternoon, all the neighborhood kids played together in a backyard. From our deck, I watched the regular chaos of children playing games and screaming in delight.

Suddenly the chorus of joy gave way to absolute silence. I looked up and saw an older boy sprinting away from the kids and into his house. Seconds later his father came dashing out of the house. Together they raced through the gate, into another yard, followed rapidly by other adults – all running.

A few doors away lived a wonderful young man with a beautiful wife and new baby. They had just moved into the house. He’d been on an extension ladder cutting branches when one snapped, smacking him in the chest and knocking him 20-feet to the ground. He lay at the base of this tree disoriented, in pain and unable to move his legs.

Police, fire, and EMS arrived within moments. They stabilized him, carted him to the ambulance, and transported him to the nearest trauma center, his and his loved one’s lives forever changed.

The storm had hit.

The rest of us stood around stunned by this crushing event. We stared blankly at the ladder still perched against the tree, the massive branch hanging menacingly above, and the yellow police tape cordoning off the site.

How could this happen? Why would it happen? And what should we do next?

Then came the sound, the first tangible evidence, of healing.

A few men went back to their houses and returned with chainsaws.

They gathered up and disposed of the police tape. They repositioned the ladder, climbed to the top, worked together and cut down the huge branch. They sliced it into firewood, stacking it neatly against the house. They removed the ladder, returned it to the garage, and raked the yard of all debris.

These men transformed a site of terrible tragedy into a monument of love. No, it would not change the devastating effects of the day. It would not bring movement back into a young man’s legs or alter the agonizingly difficult journey ahead for this family. But it was a small, important step in healing.

Anyone who has endured tragedy, though, knows there are no small steps in recovery.

Each step, even the smallest one, along the journey is critical as we journey forward. As isolating as it may feel and as slow as the pace may seem sometimes, to be reminded in very visceral ways that you are not alone, that others do care, and that better days remain ahead can change lives.

My friends, as we face storms in life, we have a choice. We can choose anger, yell about it, and remain negative about what happened and all we’ve lost.

Or we can choose to accept it, make the best of it, grow from it and realize that in spite of those unwanted changes that the best of life remains in front of us.

So, start your chainsaw.

The world needs to hear that although storms may destroy the expectations we held yesterday, they haven’t destroyed the beautiful possibility for the what can still occur tomorrow.

2 replies on “Hope After the Storm”

Been a tough year spiritually and emotionally. Grieving is exhausting especially when it is for my only biochild, an adult with disabilities who was my anchor and my wings. 14 months later, I am finally recognizing my chosen family and friends with their chainsaws who have been there all along. Thanks for helping clear my muddy vision.

John and staff,
What a beautifully timed for me to see this morning. A great reminder for me to tap into who I know I am. Just 2 days ago, my “storm” arrived in the form of a life-changing disgnosis of an auto-immune disease. Totally unexepected.
Thank you so much for the important work you all do that touches others.
I’m making my plans to not waste my potential and to help others weather their storms.
Best,
Faithful reader