The Most Powerful 5-Word Lessons 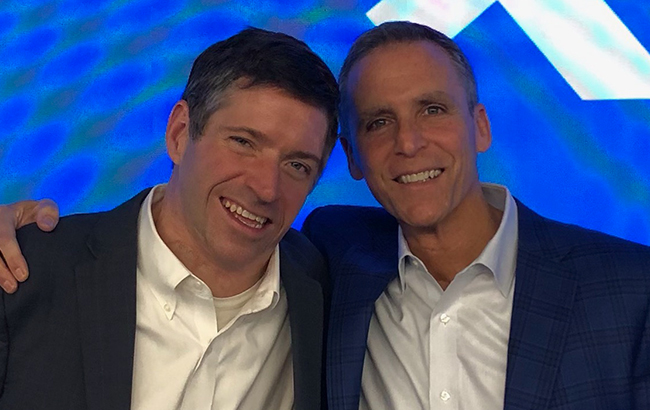 Five take-aways after 400+ episodes of the Live Inspired Podcast.

As President of World Wide Technology and a leader known for extraordinary generosity, Joe Koenig has always had my respect as a business leader. But after inviting Joe and his wife, Kim, to join me on the Live Inspired Podcast, I began to respect him as a father, husband, fighter, servant and friend.

Joe soon begins his 5th year of living cancer-free after undergoing radical treatment to eradicate an aggressive form of cancer. To honor the hope of someone who has rung the bell for their final cancer treatment- and then has the chance to ring it again five years later- Joe asked that I share five of my favorite take-aways from guests we’ve had on the Live Inspired Podcast.

With more than 400 episodes – including one featuring Joe and Kim Koenig – it was extremely challenging. But here are five extraordinary people, sharing five powerful lessons, each in five simple words:

1. “Are you a turkey person?”
An 18-year-old man from North Memphis is three times more likely to be dead or incarcerated by age 21 than in college. With this statistic fueling him, Bill Courtney sought to make a difference through coaching high school football, but it wasn’t working. Instead, he had a losing team with only 19 players, most of whom weren’t putting in any effort.

Coach asked his team captain why there was so little engagement and learned it was because they didn’t believe in him. They were worried he’d be like all the other white people who show up once a year, drop off the turkeys for Thanksgiving, get back in their cars and leave. Then the player asked, “Are you a turkey person?”

Bill recommitted himself, and as the players witnessed Bill showing up, so did they. The 19 players grew to 75; a losing program became a perennial winner; and most importantly, 35 of the 36 seniors in the last two seasons went to college. Bill is not a turkey person. And his story reminds us of the transformational power of steadfastly showing up for others.

2. “I don’t want this anymore.”
At age 18, Andre Norman received a prison sentence for 25 years. He was so violent and difficult to handle that he was moved to nine different state prisons. After the second conviction for attempted murder, Andre was sent to solitary confinement for two years. By himself, in the dimness of a small cell, locked up and cut off, he realized he didn’t want to die in jail. He yelled out five words, “I don’t want this anymore!”

That was a turning point. He spent the next decade transforming who he was into who he knew he could become. He taught himself to read and earned his GED. He learned about managing anger with a counselor; learned about the power of forgiveness from a rabbi; and learned the power of faith and love from two nuns.

Today, Andre is free and lives a life dedicated to empowering young kids to make radically different decisions than the ones he made.

3. “I’ve never shared this before.”
Brené Brown is an American research professor, lecturer, author and podcast host renowned for her work on shame, leadership and vulnerability. And yet as we spoke about the importance of knowing your value vs. hustling for your worth, she mentioned “I’ve never shared this before.” And from there, she went into her own struggles hustling for others’ approval as she worked with some of the greatest companies in the world.

The trick to knowing your value is inward and it requires that you give yourself permission to be vulnerable. Great leaders have courage…and there is no courage without vulnerability.

4. No way. I was chosen.
Scott Hamilton is a force for good in figure skating, Olympic competition and life. On his episode, we discussed his work as an announcer, his gold medal, his success as a skater, his books and his battle against cancer.

In sharing that he was raised by an adoptive family, I asked if that was ever a struggle for him growing up. He responded, “No way. I was chosen.” Scott then added, “My birth parents gave me life, but my adoptive parents gave me love. I was fortunate to have both.”

5. “I have passion for living.”
At age ten, Nick Vujicic tried to take his own life. And with no arms and no legs, it’s understandable how he could feel despair. But after a profound conversion experience, Nick is not merely enduring a potentially difficult existence. Instead, he is absolutely on fire with life.

Nick has spoken more than 3,500 times to more than 2 billion people around the world. He’s married, a father, exudes joy, and emanates faith. Near the end of our conversation, he shared five words that fuel his joy: “I have passion for living.”

My friends, advice doesn’t need to be lyrical, poetic, or particularly elegant to be profoundly meaningful.

Are you a turkey person? Transformation requires repeated effort…and is worth it.
I don’t want this anymore. Becoming something better requires letting go of who we were.
I’ve never shared this before. Know your worth…and realize there is no courage without vulnerability.
No way. I was chosen. It’s not an accident you’re here. Be intentional and choose gratitude.
I have passion for living. Your life, yes, even the imperfect part, is a gift. Act like it.

Regardless where we are in our journey, we begin pivoting into better days when we are reminded of these powerful leaders and their seemingly simple words of wisdom.

I leave you with five final words:

7 replies on “The Most Powerful 5-Word Lessons”

I have been following you for years John and you only get better with each new episode! Thanks for this “snippet” of your vast wisdom!

Another inspiring blog. A terrific way to start today and this week. Thank you John.

I am 79 and working full-time at Costco. I have a passion for living!

Good advice for all!

Wonderful! Simple truths to take to heart. Thank you yet again for being You!