Skip to content
Home | Blog | The Importance of Being Understood
Monday Motivation | May 16, 2022

The Importance of Being Understood 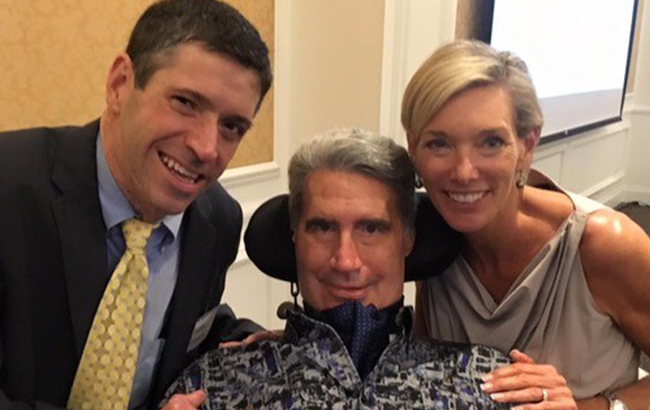 “Being heard is so close to being loved that they are almost indistinguishable.” – David Augsburger

At the time I met him, Augie Nieto had lived with the brutal realities of ALS, commonly known as Lou Gehrig’s disease, for more than 10 years. Knowing the trajectory of the disease and the certainty of losing everything, shortly after the diagnosis Augie tried to take his own life.

Against overwhelming odds, he survived the attempt. More than that, the experience ignited within him a deep desire to not just refuse surrendering to the disease, but to become a masterful example of abundant life in spite of it.

We connected after my talk and spoke for almost an hour. I asked what the most difficult aspect of this brutal disease was. He responded:

He sat motionless in a motorized wheelchair and unable to move any muscle other than his big toe on his right foot. Augie typed his conversation with me.

Using technology he helped design, he was able to use his toe to slowly type letters and communicate with friends. He had a wicked sense of humor, a beautiful heart, and a gorgeous bride named Lynne.

The man had been a pioneer and global leader in the fitness industry. He founded, grew and eventually sold the hugely successful brand “Life Fitness.” For Augie, fitness wasn’t just work, it was life. He epitomized health and was a world-class athlete before his ALS diagnosis.

This one sentence had already taken him more than a minute to type. It was laborious, requiring all his mental effort and physical strength. He occasionally glanced over to make sure I was paying attention – and to let me know he was enjoying being heard.

At this moment someone approached thanking me for speaking earlier. I hugged him, thanked him and asked if he’d ever met Augie. He’d not. The gentleman then stuck out his hand to shake Augie’s. Unable to move anything other than his eyelids and big toe, Augie stared back. After an awkward silence, the gentleman pointed at Augie, told him he looked great, turned and walked away. It was a painful moment for the gentleman, certainly, but something that Augie experiences frequently.

What terrified Augie, what he said was the hardest part of the disease, was not losing everything physically, the painful progression of ALS, or even the inevitable loss of life, but that in almost every room he was in, people looked past him, they ignored him, or they felt sorry for him.

And yet, the point of this story isn’t really about the agony and anxiety of a man, physically bound, grasping onto the gift of life.

The real point is that too frequently we are the timid, awkward gentleman who would rather point, smile, tell others they look great, and then quickly walk away, than risk leaning in, crying with, understanding, and wholeheartedly sitting in the mysterious complexity of how challenging, agonizing, and beautiful life actually is.

My friends, in a world that is so overwhelmed with busyness, preoccupied with self-interests, and motivated by fear, we are invited daily to uncross our arms to the challenges, hopes, dreams, and lives of those with whom we come into contact. We are free to wake up from accidental living, and choose instead to be radically alive.

Now’s the time to lower your voice, drop the sarcasm, and turn off the phone. This is the day to pull up a chair, open your heart and step into the one thing individuals around us are clamoring for more than anything else: being fully seen, truly heard and actually understood.

No, it likely won’t cure a man of his diagnosis. And it’s improbable to make all the issues of the day fade.

But your presence and love, shared boldly and vulnerably with those you encounter, may do something ultimately even more important: provide a light in the midst of great darkness. And that glimmer will remind them that they are not alone, that there is reason for hope, and that the best is yet to come.

Augie Nieto continues to remind us all that in spite of the challenges we face, there is still reason for hope and joy. In honor of ALS Awareness Month, I encourage you to learn more about my friend Augie and his quest to change the experience of people living with ALS.

7 replies on “The Importance of Being Understood”

As someone who lives with a woman who was diagnosed with ALS over 3 years ago, I’m in awe of the courage it takes to face the challenges this disease presents. And when given the chance to bring a little light into her day, I jump at the opportunity as I believe it is a gift of love to serve and help others (and am reminded daily), whether it’s bringing a smile to her face or a chore I can do on her behalf or just sit with her. Hat’s off to the Augie’s (and Sylvia, my girlfriend of 13 years) of the world and the Lynne’s who are there to support and help in whatever ways they can. Thanks for sharing this John!

How serendipitous that this week Augie’s story is reprised in the blog! I am planning to also reprise sharing it in this week’s sermon on John 5–the healing of the man at pool of Bethseda: “get off your butt.” (From your grateful CPE mentor, ON FIRE pp 40ff)

I feel so small because I get upset about dumb things that aren’t important.

Thanks for sharing his important perspective. This is almost Myositis Awareness Month. As a person living with one of the forms of an incurable autoimmune disease, I admire his inner strength to communicate a BIG message. Also lots of love to the amazing caregivers and friends who make the effort to SEE the person others may not be quick to acknowledge. They get how much effort it takes to get through a day.

Love this message, thanks for sharing. I knew Augie’s story from the owner of the gym I used to attend who knew him and his wife. Every year we’d do a challenge to raise funds for Augie’s Quest, and in the process learn more about his journey and ALS. Such a great reminder to make every moment with people count, whether family, friends, strangers at the store, or someone homeless on the street. Notice them. Make eye contact. Listen. Connect.
Sorry I missed the team in St Louis Friday. Next time for sure.

Stop and smell the roses. Look and develop deeper relationships in this drive by world we live in today.