Angels Come in Many Forms 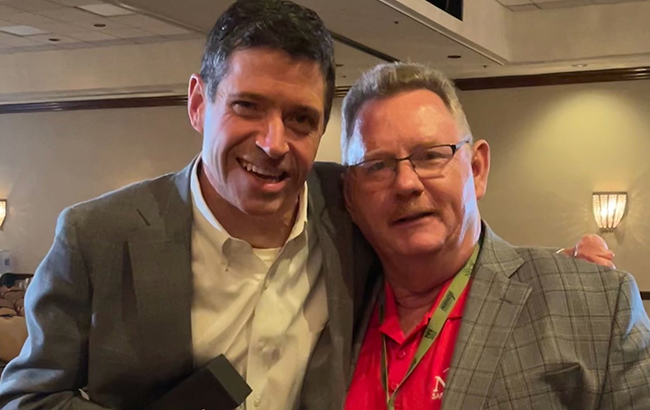 How a ticket agent’s small act of kindness had tremendous impact.

“The great acts of love are done by those who are habitually performing small acts of kindness.” – Victor Hugo

I met Wes Wheeler at the NECA conference in Scottsdale, AZ last month. He was the first person to greet me when I walked into the venue and was kind enough to walk me out at the end of the meetings.

As he ushered me to the lobby and into my car, Wes shared how meaningful the message was and how profoundly impacted he was. I asked him the main message he heard and Wes replied: “The importance we can all play in the life of someone else.”

The tears in his eyes suggested he had more to share.

That’s how I found myself hearing about Charles, Dot, and a day in 2019 Wes will never forget.

On December 5, 2019 Wes received the call he had been dreading. His brother Charles, terminally sick with cancer, had taken a turn for the worse. He didn’t have much time left and if Wes wanted to see him, he had to get to Jacksonville as soon as possible.

Wes raced to the airport and learned the soonest he’d arrive would be just before midnight. While booking that flight he saw that a flight to the same destination was currently boarding which would have him arriving nearly four hours earlier. Although last minute, sold out, and already boarding, Wes explained to the agent his plight.

The gate agent, Dot, clearly moved, began frantically typing and working the phone. She had family, too, and knew how important it was to be present in life and death moments.

Dot secured a seat for Wes on the earlier flight, ushered him to security and wished him the very best in his visit with his brother.

Charles Wheeler passed away in Jacksonville at 10:30 p.m. that evening. It occurred an hour before his brother Wes was originally supposed to be there.

But thanks to his “angel” Wes was there holding Charles’ hand when he died. Because of Dot’s diligence and kindness, Wes arrived by his brother’s side and spent an hour telling stories, sharing family memories and praying with his brother. It was a sacred hour together that happened only because a gate agent named Dot saw the human.

After the funeral and still wrapped up in his own grief, Wes arrived back home. When he landed, he didn’t head to the baggage claim or a parking garage. Instead, he went directly to the main lobby where the ticket agents work. He waited in line, not to buy another ticket, but to thank someone who made all the difference in the world.

He approached Dot, tears in his eyes and thanked her for helping him make the earlier flight. Wes shared he was with his brother when he took his last breath and that only happened because of her kindness and industriousness and wanted to thank her.

When Wes finished thanking Dot, she had tears in her eyes, too.

My friends, our work does matter, the little things we do for others can make mighty differences, and each day we are called to recognize the importance we play in the life of someone else.

Let’s not miss that chance today. In our own ways, let’s choose to make a difference like Dot.

7 replies on “Angels Come in Many Forms”

This is beautiful! God opens doors thru others!
When my husband was in hospice for final visit, the nurse at front desk stopped me and told me to ask my kids to leave his room…I was baffled, but did as she said telling our kids I wanted a few moments alone with him, not knowing what this was leading too.
He was waiting for me….to be by his side when he passed. I sat in his bed holding his hand. He could no longer speak. I told him if he saw the angels to go to them now. It was his last breath.
I’m forever grateful this hospice nurse guided me to have these last moments together.

Thanks for inspiring us to reach out to others- and reminding us that even in small ways we can make a big difference!
Blessings!

How spectacularly beautiful and inspiring to me this day.
I am engulfed in tears of thanks
and joy for this man that made it to his brother in time. Dot might never have known but just keep on doing little things and God is always there and knows. That’s what countsAmen!!!

I really enjoy reading your Monday live inspired stories. It is so easy to forget there are still helpful people in these days and times and your stories remind me of this. Have a great day.

Amen! Great way to start the day – thank you!

Thank you for this impactful message this morning! Our work matters, no matter what kind of work it is! I’m sharing this with our team tonight at our family/staff meeting.