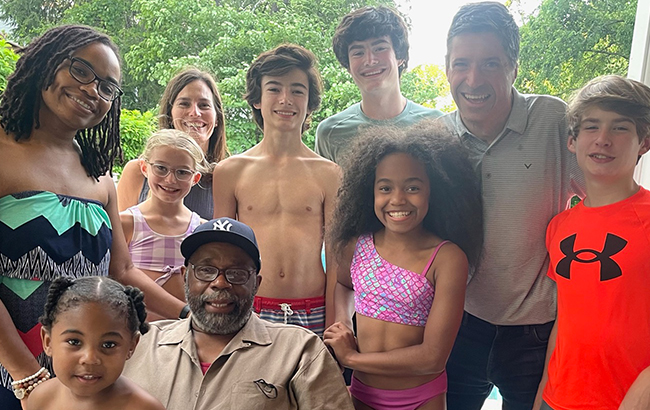 “You can easily tell the character of a man by how he treats those who can do nothing for him.” – Johann Wolfgang von Goethe

Years ago, I ran a small construction company. Continuously running material, picking up tools, and dropping lumber, I spent significant time in a truck with my General Contractor, Harold Stewart.

Working together for almost a decade, Harold certainly taught me much about framing, wiring, plumbing and painting. The greatest lesson, though, was the power of consistent generosity.

Every time we passed someone asking for money at a stoplight, Harold would reach into his pocket, pull out some money, roll down his window and call the man or woman over. The light would turn green, the window would roll up, and the truck would move forward, but not before Harold had invested in another human.

One morning as we drove away, I asked Harold why he always gave? Wasn’t there a better way to help? Wasn’t he afraid the man would just waste the money? Was his generosity actually just making the problem even worse?

Harold looked at me sternly, seemed slightly bothered, and firmly responded, “John, I’ve been there before. Who knows, someday I might be there again. I know what it feels like to be ignored….and how it feels to be helped. I don’t really care where that man spends my money. I don’t care why he doesn’t have a job. I don’t care about what he did to get thrown out of his house. The man is outside, on a corner, begging for something, and I’m going to give to him.”

While it’s easy to allow relationships to fade in time, Harold has refused to let our friendship atrophy. Although we haven’t worked together in 15 years, at least once a month, there’s a loud knock at the back door early on a Saturday morning, and behind that door is Harold, a box of donuts in hand to put smiles on our kids’ faces. The donuts are great, but I prefer the long conversations we share before those little ones get up.

Perhaps the best model of Harold’s consistent generosity, though, has been the way he’s taken care of his brother, Sam.

More than 10 years ago, Sam had a major stroke. It left him bedridden, totally immobilized and unable to take care of himself. Having served in Vietnam, Sam could have moved into a Veteran Retirement Home. Instead, Harold cleaned out his bedroom, moved a hospital bed into it, and insisted his brother move in with him. For the past ten years, every meal, every bath, every physical need Sam has required has been met by his brother, Harold.

Last weekend we invited Harold and his family over to celebrate his 70th birthday. Many of the stories shared around the dinner table were about what it was like growing up with Sam, the trouble they got into as kids and how they always got through it together. It was a wonderful night filled with lots of laughter, with my dear friend and our families.

And that time together was made even more meaningful hours later when Harold sent a text at 3am that simply read: “Sam just passed away. Grateful I still have you as a brother.”

My friends, there are so many examples of selfish people, tragic events and senseless violence today. In a world as broken as ours we often wonder what we can do to make a difference.

The example my friend- my brother- Harold models is a simple solution to the profound challenges we face today: Love people.

Choose to be kind to the one in front of you. Choose to invest in relationships for the long term. And choose to be generous to those who can’t repay it.

It may not change the entire world, but unquestionably it will change the life of the one you serve. And perhaps that’s how we begin making the actual change the world longs for today.

This story and your remarks are exactly what I have been talking about with people for quite a few years now. If people could just remember to be kind to each other and not constantly looking for what s/he can get out of a situation, I do believe we, as in all people, could change the outcomes for so many others.

We never know how our actions will benefit someone, the ripple effect. To those who work in teaching jobs with difficult kids and families, keep trying to be positive!! I share John’s message often

“God is Love. Love one another”
Thanks John for reminding us!!

Just a few days ago I had a similar encounter with a lady at an intersection holding a sign that she had three kids to feed and needed help. I gave her some money and she smiled back at me thanking me at the same time. I had the same thoughts as you afterwards but glad I helped her nonetheless.

Beautiful and very inspiring! Thanks for sharing with others!!

Thanks a for sharing this John. The story about Harold really hits home for me as I have a similar situation with my mother. Thanks as always for everything you do to make this world a better place.

Thank you for the “love letter” message this morning. It is providing me a jolt of inspiration as I engage in my “Monday Morning Gratitudes.”

This is a s a great story. I am going to share it.

It will change the life of the one you serve. Beautiful.