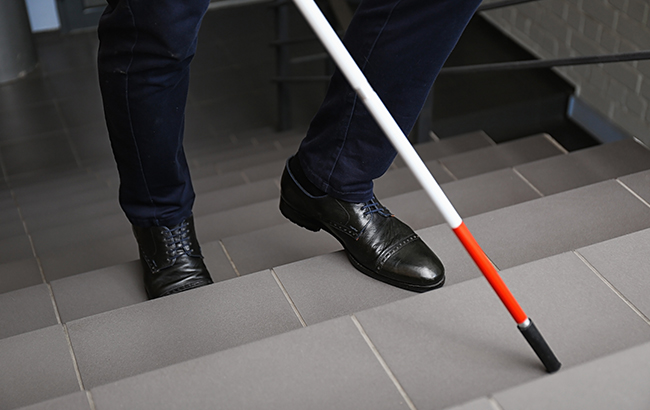 Why accepting help is not a sign of weakness.

“There is no greater disability in society than the inability to see a person as more.” – R.M. Hensel

After an early morning flight from St. Louis, a layover in Phoenix, and a smooth landing in San Diego, it was time to launch into the day. With a couple coffee meetings scheduled and a speaking event that afternoon, there was little time to waste.

Free to move about the cabin once the ding had sounded, I unhooked my seatbelt, slid into my suit coat, grabbed my overhead bag, and raced off the plane.

The bustle of the airport was palpable. The floor gently vibrated; the terminal reverberated with laughter, conversations, and PA announcements. With individuals bustling about everywhere, I swam right into the middle of the sea of activity, tugging my bag, hurriedly moving toward my ride, my meetings, my day.

In the middle of this packed airport a man in front of me seemed to split the sea. Strutting at a casual pace, he ventured directly down the middle of the terminal scattering those both racing toward him from ahead and passing him from behind. Following him for a bit, he seemed indifferent to the chaos around him. He kept a steady pace, never glancing anywhere but forward.

In switching lanes to speed past him, I noticed in his right hand a long white cane rhythmically darting left and right; glancing closer I saw dark glasses covering his eyes. Completing the pass and continuing on my way, I was amazed how what most of us struggle doing with our vision, this gentleman was capably doing without it.

Not far ahead I noticed several sets of escalators and stairs. For the first time since deplaning, and maybe even for the first time that entire day, I stopped racing forward. I stopped trying to get my work done, or to my meeting, or to sprint through my day. I slowed my advance, waited for him to get closer, and then greeted the gentleman:

“Excuse me. Hello…would you mind if I walked with you?”

He responded that he’d actually appreciate it.

I stepped closer to him, extended my left arm, he felt for it, took it, and together we continued.

As we made our way through the waves of commotion, down an escalator, past security, and toward the baggage claim we made small talk.

His name was Jesse. He was coming from Colorado and visiting a friend in California. He worked in IT and was comfortable traveling by himself and navigating new places. After all, he’d been doing it since birth.

Having spent significant time with others who have perceived disabilities, I asked if he appreciated the help or resented the request? Jesse shared that for most of his life he turned down any mention of help, any guide, any suggestion that he was less than capable. He then described that refusal to accept aid as stupid pride.

But Jesse shared that since he no longer views what he has as a disability, he is more than happy to accept offers of help.

He added that accepting help didn’t degrade him; it elevated those who helped him.

After successfully arriving at baggage claim and rendezvousing with his companion, I turned to face Jesse, shook my new friend’s hand firmly and told him it was an honor to walk with him.

Seeing his face a bit taken aback by my unusual handshake, I added that if he was wondering why my hands felt a little different than the majority of hands he’d shaken in the past, it was because I lost my fingers to amputation after being burned as a kid.

He smiled, looked at me and replied, “Well, John, you could have purple skin, orange eyes, and a polka dot tail, and I wouldn’t care. What I CAN see is two guys who aren’t limited by the challenges.”

My friends, we all face individual challenges.

We endure limiting beliefs, addictions, physical challenges, emotional insecurities, pangs of grief or doubt or anger. Getting transfixed on the challenge, the adversity, the abnormality, of the perceived disability is both common and unhelpful.

And we are as likely focusing on all that’s wrong as we walk through an airport as when we stare into a mirror disappointed by the reflection.

But since there is no greater disability in society than the inability to see a person as more, choose to see the ability, the possibility, the beauty, the good.

It will shape the way you walk through an airport and the way you approach the days, weeks, and life ahead.

21 replies on “Accept the Arm Extended”

John
You always remind me with your true stories of what is important in life. Thank you for another inspiring story.
God Bless you and your family.

John, I don’t know how you continue to inspire me in different ways, week in, and week out.
But, you do! I love this story, and I appreciate you sharing it. “…choose to see the ability, the possibility, the beauty, the good.” Incredible lessons for life!
Have an incredible week my friend!

Thanks John for sharing… My wife and I are members of Lions Club International, a service organization serving those in need, with a focus on eyesight limitations or blindness.

Through Lions we have the opportunity to meet many Jesses, many are Lions themselves and become friends. Jesse’s story is such a representation of those with blindness or those with physical limitations in general. My wife and I have been so fortunate to hear so many interesting stories and meet so many people living amazing and inspiring lives.

We so appreciate you sharing this story, and reminding all of us, inspiration is around us everywhere, everyday.

You have made me think about why I hold back from just jumping in sometimes! Just a simple “Excuse me…” opened your eyes AND heart to Jesse! You are just BEAUTIFUL, John! Thanks for sharing!!

Good morning. And thank you, John!
I am a legally blind man, born with atrophied optic nerves. While I do not suffer impairment that is radically debilitating, I have been challenged since birth to navigate my way in the world, unable to see normally both up close and at a distance. Yet I have been blessed with loving parents, an incredibly supportive wife, two beautiful (adult) children, a teaching career spanning 35 years, and a vocation in the Church as a permanent deacon. “Choose to see more” has been my life story in many ways, yet your perspective, John, challenges me to continue to “see more”–not only with my own visual limitations but also with the eyes of my heart.

“Excuse me. Hello…would you mind if I walked with you?” Is the key here. Beautiful!!!

Thank you John for a beautiful reminder that asking for help is actually a strength, not a weakness. I loved your boldness to ask whether or not your offer to help was offensive to Jesse. You are such an inspiration.

Good Morning John
Thank you again for such a beautiful reminder to live inspired.

Good morning John. Love the part where Jesse learned to accept help. Addiction , whether to drugs or alcohol, many times continues because a person refuses to accept help. Pride and denial get in the way to find that helping hand of which there are many. Just need to find those or like you hold the arm of someone

Good morning John. Blessing others blesses us far more. Thank you for sharing your insights.

Thank you! My favorite quote is “Whatever you focus on, grows.” Love how you both did that so well in this story. Life is so much sweeter when we do…God bless!

Very inspirational. After reading this It shows me that my limitations are very small.

Hi John. Thanks for the reminder that taking a couple of minutes to be human and vulnerable in a busy life has the capacity to change that life.

GREAT message and one that I really needed to hear today. Thank you so much.

This inspired me because I traveled with my blind sister-in-law and many say to me don’t you have enough challenges with your wheelchair and disabilities and my reply is that our relationship has always looked at our capabilities not our limitations. Thank you for this story.

You are amazing. You inspire me as well

Good morning John. Our pride is a killer. Thanks for the reminder, again.