No Ice Cream Until…. 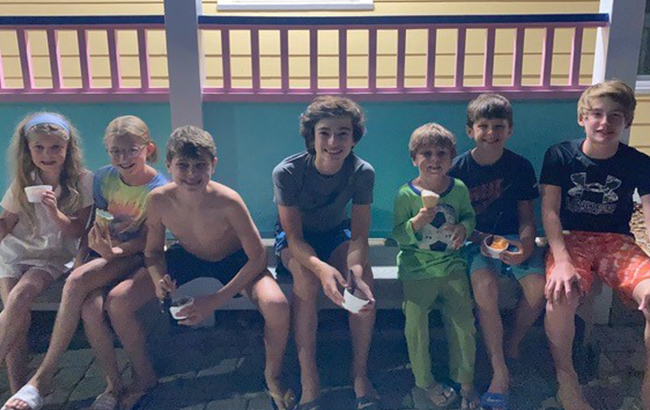 How a situation went from bad to worse to AWESOME!

As schools prepare to open, it’s a great time to reflect on some highlights from summer before it fades.

For me, the list includes morning walks with Beth, a slower pace at work, evening swims with Grace, playing cards with my boys and family vacations to Michigan and Florida. One highlight, however, started as a bad experience, became even worse and through a new friend’s generosity was transformed into a highlight. Let me explain.

On our last night vacationing with my parents, five siblings and 21 cousins in Florida a bunch of the younger kids wanted to get ice cream together. Beth and I loaded them up into a golf cart, double buckled a few, triple buckled the rest and began the short commute. The night was cool, the stars were out, the kids were laughing, the week had been perfect and the glistening lights of the ice cream hut appeared in sight. Everything was perfect.

Until the bright red and blue lights of a police car pierced the darkness and sirens shrieked over the sounds of nature. My heart sank – as did my pride – as I pulled the golf cart off the road into a parking lot used as overflow for the ice cream stand. (A little golf cart pulled over with seven kids in it became quite the spectacle for an extensive line of customers waiting for their ice cream.)

While they gawked at us, the kids behind me started asking questions.

“Why did they pull you over, Dad?”

“Are they going to take you to jail, Uncle John?”

“Will this be your first time in jail?

“Does this mean no ice cream?”

The officer approached and explained that although our headlights were on, the taillights weren’t. She needed to run my license, but would get us out of here as quickly as she could.

After getting my license back, I thanked the officer, double checked that the tail lights were on, pulled out of the spot and finished the commute. We parked, the kids popped out, skipped to the end of the line, and waited to place our order. It had been a bit of an ordeal, but the night was back on track.

Until Beth whispered to me, “You have cash, right? This place doesn’t take credit.”

My heart sank as I realized neither of us had brought cash.

We looked at these little kids, with the realization the place was closing shortly. There wasn’t time to run back for cash. The little ones were going to be disappointed.

We started telling the kids what happened, prepared to step out of line and dejectedly return to the golf cart, defeated.

Until a gentleman a few people behind us heard our conversation, approached and shared that he’d like to buy our family ice cream. After repeatedly telling him that his offer was too generous, we had too many kids, it cost too much, he shared:

“John, I actually read your book ON FIRE. I loved it. And I’d love to buy your family’s ice cream.”

My friends, the suntan from that Florida sun has faded. The shells collected from the beach have been misplaced. The sand has finally been washed out of the clothes and the ice cream stains removed from the kids’ shirts.

But none of us will forget our last night.

We won’t forget the series of mistakes that almost made the night a total failure.

And we won’t forget the unexpected generosity of a stranger who did far more than buy ice cream for a bunch of kids.

What he really did was remind a line of onlookers that anyone can stand back, gawk and feel sorry for another.

But the opportunity we all have is to not merely observe what’s wrong with someone else, but to care enough to step up, to walk over and to try to do something that makes a difference.

We all know life is not perfect. We all know it’s hard. We all sometimes struggles with self-doubt and self-worth.

Until someone shows up. Reminding us that we are loved, our life matters and the best is yet to come.

Take the opportunity today to be that person for someone else.

John,
Loved your ice cream story. It brought back treasured memories of an ice cream store in Holland, MI where we treated our kids during summer vacation.
Jay Staley

The simplicity of a random act of kindness has become an rarity over these last several years. But through your heart and your words to the rest of us, it will not become extinct. We simply will not let it do so. Givers always gain (in more ways than can ever be counted).

I love this story, John, and I love your inspiration! Thank you for reminding me to take the time to be kind and helpful.

You did it again, John. It is in giving, we receive! I bet that guy is still flying high that he could help out with buying those kids ice cream. I hope you got a double decker! What a memorable vacation.
I loved all the questions from the kids…. Lolol

AWESOME message John! It only takes a second to be kind.

Everyone can make a difference most any day by doing simple acts of kindness. TY for the inspiration.

That’s a real act of kindness thst will live in those kids lives forever.

Sorry I don’t usually write on this. But I read your blog every Monday and am so blessed by your insights and stories. Many times I’m in tears as they touch me deeply. Thank you so much for being you John. I thank God for you and ask Him to bless you and your precious family! Oh if only there were more John O Learys our world would be a much better place.
Keep spreading Gods love and peace and joy to others! Thankfully…..

Becky, I love your comment to John. I wish I could have said it as well as you. You have a gift! John is a special guy and he makes us all think about the things we could all do to make the world a better place. I hope to do my part when the opportunity arises. We all need to be more thoughtful and caring.

Thank you for sharing. Loved it. I met you at the cattle course up in Hemphill county Tx. And I do my best to live inspired.
Gerald

Oh my. The tears are flowing. What a touching story. I have gifted your book to people over the years…coaches and teachers. And my copy resides on my living room built in shelves for all to see. Simply put, I just love your heart John. Thank you for sharing such a great story.

I wish I was that guy! I would be honored to meet you and your family and buying ice cream for kids and families is one of my favorite things to do!!! You are a blessing to our world, and everyone you meet. ( And we were stopped for no tail lights in the golf cart too!! That knob is hard to see in the dark…😉) God bless you and keep you.

What a great story! Heartwarming, funny and a great reminder of how easy it is to show up. Thanks John!

I needed this story today. Thank you for sharing.

I loved this story, for I’m sure the experience was just as meaningful and rewarding to the generous stranger. Again, I am reminded to look for more opportunities to be giving, and to be the hands and feet of Jesus.
John, I read your book, too, and attended one of your talks at my church. Thank you for reminding us to live a more inspired life.