Skip to content
Home | Blog | Let’s Get Back to Living
Monday Motivation | November 7, 2022

Let’s Get Back to Living 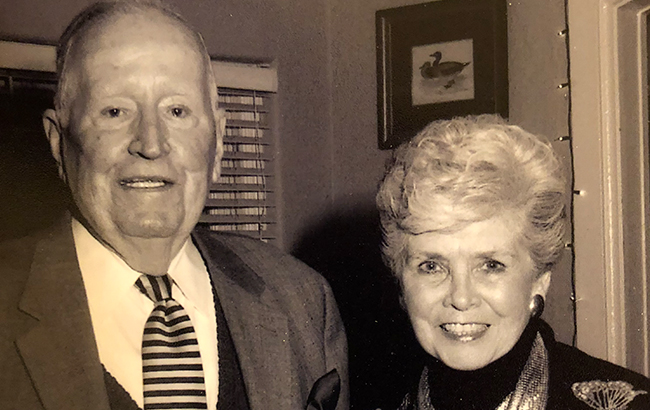 Why I’ll be voting in the midterm election tomorrow.

With the constant pace of change, dramatic shifts societally and significant challenges we face both locally and globally, a perspective of navigating these difficult days thoughtfully is critically important. Few offer a better example of serving others, leading effectively and living well than my grandfather.

Grandpa was my hero growing up. Although he became a successful attorney, the lessons he learned growing up on a farm, enduring the Great Depression, and fighting for his country in World War II kept him humble, generous and shaped his worldview.

Although he sat in the first row of church and his voice echoed loudly as he sang, the language he used on the golf course after hitting a bad shot would make a seasoned sailor blush.

Although he was totally devoted to his wife, adored his two girls and was dedicated professionally, every single night after work he visited his parents on his way home. Yes, Grandpa was busy, but he wanted to make sure his aging parents were alright, they had everything they needed and they knew he loved them.

Although he was 80-years-old when I was a college senior, he was the kind of guy who would put on a suit, grab his favorite date and join us at a fraternity party when I invited him. (Just check out the picture above of him with my adorable grandmother.)

And although he was an incredibly kind man, occasionally a faint glimpse of temper would reveal itself in a stern face, a sharp word or, when very agitated, a lengthy sermon. On election night in November of 1992, I remember preparing to hear one of those speeches.

After joining us for dinner, he and Grandma watched the election results at our house. President George Bush was running for re-election. While his grandchildren may or may not have agreed with him, Grandpa was very firm on where he stood that election. Having served in the Pacific with Bush, my grandfather respected the service he offered his country and the moral compass that guided his life. Like it or not, we knew he voted Bush.

Perhaps more than his appreciation for President Bush, however, we also knew he did not care for the young candidate running against him. It’s why I remember anxiously watching election night unfold as it became obvious the candidate he supported would lose the election. I wondered what he might say or what anger he might show.

As the announcement was made that Bill Clinton would become the 42nd President of the United States, Grandpa stood from the couch, walked to the television, and turned it off. He then looked at those gathered in the room and delivered the speech we all knew was coming.

Possessing the brilliant ability to quote from Scripture or English literature or even the occasional Irish limerick as he delivered meaningful discourses, we knew this one would be both lengthy and delivered with a little indignation.

He thoughtfully looked at each of us and said, “Well, I didn’t vote for the SOB. But he’s our President now. Let’s hope and pray he’s successful leading our country forward.”

No quoting destruction from Revelations, no citing vile from Shakespeare, no fatalistic humor from some Irish limerick. He didn’t tweet out his fury or curse his fellow citizens for voting for a young charismatic politician. He didn’t sit at the television, sulking at the results and preparing for a counter-offensive.

He accepted the results, prayed for the newly elected official, and encouraged his little ones to do likewise. He then did something equally important: he got back to living his life. Grandpa worked every day of his life into his 80s. He stayed committed in his marriage, supportive of his family and generous in the community.

He was a remarkable example to have as a grandfather. And as a citizen.

As a nation we enter into another election tomorrow. Although there won’t be a new president, we are electing 36 governors, 34 senators, and all 435 representatives.

Today, as you scroll through social media or watch mainstream media, you’ll likely be repulsed to imagine that half your neighbors could feel differently about the issues you passionately support. You’ll be stunned to imagine living in a country so different than you. You’ll be told by the channels you tune into that the very life of the country hangs in the balance.

But even if we adamantly disagree with how he voted, I think my stoic, wise and strongly opinionated grandfather points us not only to a different, more idyllic time, but to a future we must choose together. His example is of a time when opinions were held so firmly that we actually had the fortitude to visit with, live with and even love those who held opinions different than ours.

My friends, I encourage you to deeply care about issues, to have strongly held and well-informed opinions and to vote in elections. But I also encourage you to turn off the news channels, stop the scrolling, and get back to living together.

11 replies on “Let’s Get Back to Living”

My father taught us valuable lessons as we grew up and I hear those words now even after he has passed away. Live each day and do good be nice. Thank you for carrying the inspiration forward.

Thank you John for sharing about your grandpa and his wisdom. I wish everyone in the USA would read this and take it to heart!! Praying for our country!

Well said John. I yearn for the old days when, if your candidate lost, the reaction was not anger or gnashing of teeth, but, rather, “we will work hard to win next time”. And we expected our party leaders to start governing and stop politicking, which meant making reasonable compromises with the other party. Seems that would be a pipe dream today, but we must fight to get back to that atmosphere.

I agree John. Once we know the outcome we must go on. However we must strive to do the next best thing. We know the truth and must continue to pray for guidance forward.

Great Story and well said! I appreciate the value in your Grandfather’s wise words and hope that more of the U.S. will start listening to that wisdom!

Well said John! We may not be satisfied with the result tomorrow, but we CAN live a life full of satisfaction knowing we are loved by a God MUCH bigger than any government or authority established in this land of the free and home of the brave.

Sage advice from your grandfather, and well said John! Life is what happens when we aren’t paying attention!

A good message to ponder. 1 Timothy 2:1-2 …pray for your leaders…in order that we may live a tranquil and quiet life…

I agree with you grandfather. A wise man indeed. We may not like the situation but we will move forward and do our very best.
Mr. Hobson