What We Seek, We Find 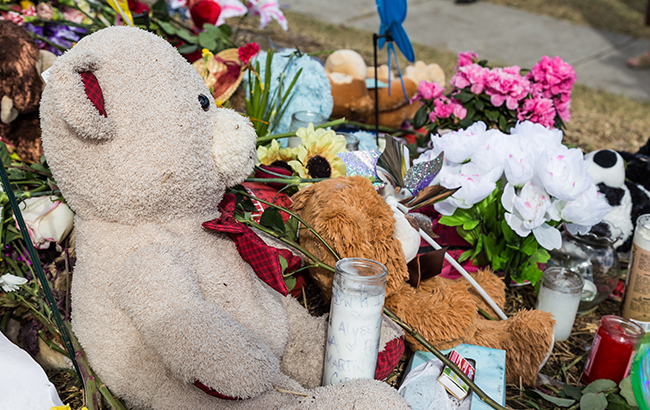 How a recent tragedy in my community reminded me of the good in others.

And after writing these words, a 19-year-old placed the note on his passenger seat, exited his car and entered the high school he had graduated from just a year earlier. He entered the school with an AR-15-style rifle, with 600 rounds of ammunition and with the determination to make others feel the pain he carried with him.

Surrounded by so much divisiveness, anger and cynicism, it’s easy to be overwhelmed with despair and to focus on the negative. It’s common to lose hope in humanity and believe things have never been so bad. Yet in the midst of this recent tragedy that rocked my hometown, it’s important to not only share the calamity that occurred, but the heroes who leapt into action ensuring it wouldn’t be far worse.

Central Visual and Performing Arts High School is a highly-regarded and tightly-knit school community in St. Louis, MO. After a 30-year career as a Marine, Germaine Yancy chose to become a security officer there. He wanted to invest the second half of his life positively impacting young people in our city. Yancy was one of the first to see the gunman on the morning of October 24. He immediately radioed in the alert and then sprinted classroom to classroom informing the teachers that this wasn’t a drill. He demanded they shut and lock the doors, turn off the lights and hide. The former Marine shared that he “felt like God put me in schools for a reason, so I could move kids in the right direction.” And on a morning where these young people desperately needed direction, Yancy provided it.

Principal Frederik Steele, known to the students for both his firmness as well as his love of them, heard the shooting and the screams. He moved hallway to hallway at great risk to his own life, reminding staff and students what to do and where to go for safety. He did his best to keep every one of his kids alive that day. Although seven were injured and tragically 15-year-old Alexzandria Bell would die, Steele sat with and comforted her until the paramedics arrived.

Upstairs, Jean Kuczka, a teacher for more than three decades and nearing retirement, heard the shots down the hallway from her classroom. As the horrifying sounds got closer, Kuczka took action, putting herself between the gunman and her students. Described as joyful and caring by all who knew her, Kuczka would ultimately get shot and die. The students she dedicated her life to educating, though, survived this brutal attack.

Nearby, a contingency of police officers were at a funeral service for a fallen officer when their radios alerted them to an active shooter at the school. They sprinted out of the service, toward the school and within 4 minutes of the first shot, were already entering the building. They had no body armor, no guarantee of safety and no real understanding of the situation they were about to encounter. Yet they entered the building without any concern for their lives. These police officers were willing, as they are each day, to lay down their lives for others.

They were able to quickly enter through the building’s back doors because nearby construction workers had heard the chaos, approached and offered to help in any way they could. Using their construction tools to wedge open doors that otherwise would have been impenetrable, they helped the officers enter into the building.

As children and teachers evacuated the building and made their way to safety, a nearby grocery store opened the entire store to the school. The employees of Schnucks grocery store passed out pallets of water and snacks to the students and teachers. They offered a safe place for them gather, grieve and ultimately reunite with their families.

My friends, the shooting at Central Visual and Performing Arts High School came on the same day a Michigan teen pleaded guilty to murder charges in a 2021 school shooting. It came a week before another teen received his sentence for the shooting in Parkland, FL. It represented the 40th school shooting this year to result in injury or death. And, appallingly, there have been additional school shootings in the last several weeks.

Much needs to be done to keep our students and teachers safe. Honest, bold conversations must be had around our current culture of gun violence. Creative and bi-partisan discussions must put forward solutions to the mental health pandemic impacting our nation. Security within schools, training for staff and wellness programs for students must become a priority for administrative leaders.

These are profoundly complicated and divisive topics.

And yet, despite the massive challenges we face, the school shooting we endured as a community reminds us of the extraordinary power of disparate individuals coming together for a cause bigger than themselves.

The example set by unarmored police officers and selfless school staff members and grocery store workers reminds us not only of how a diverse group of individuals coming together helped save lives several weeks ago at a school in St. Louis, but how it will ultimately help elevate and safeguard lives going forward.

In witnessing the selfless love within this tragedy, perhaps we can choose to model it in our ordinary lives, too.

40-plus school shootings this year and we are just numb to it. Todays headline, forgotten tomorrow. Thanks for shining a light on the bravery of everyday people living in service to others – let us remember that goodness still exists in the face of this madness that, heaven help us, may never stop.

Phenomenal article. In spite of all the evil in the world, we can come together for the good of our neighbors. The message sent in all faiths across the world—love of neighbor. But taking that into account we need to be pro-active as a society regarding mental health, gun control and economic disparities.

No. Words. Just heartbreak. We need to have the conversations. We need to help our young men – when they’re young. Someone noticed he was a loner. Someone in the family had an idea. His note says it all- he didn’t value his own life – he certainly didn’t value another’s