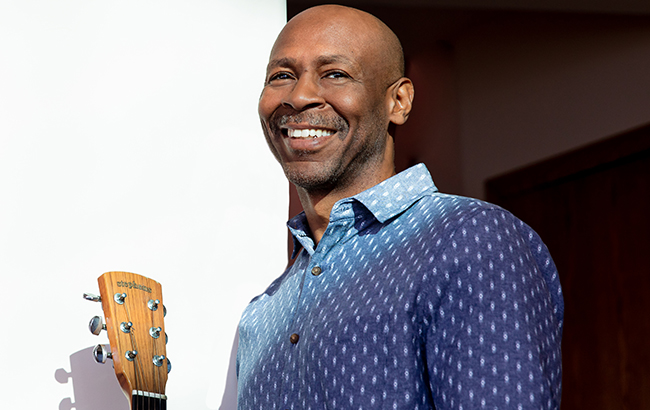 To celebrate Jazz Appreciation Month, I’m honored to welcome Kevin Eubanks, one of the most accomplished jazz musicians of his or any generation.

As a prolific guitarist and composer, Kevin is frequently recognized for his role as former Music Director of The Tonight Show band, appearing on The Tonight Show with Jay Leno for 18 years.

Yet it’s what led up to this iconic role that is most intriguing.

Today, Kevin shares about growing up with a strong musical influence, what it was like to hitchhike to gigs around Philadelphia at 13 years old and how he was able to overcome his shyness.

And I can’t forget to mention…Kevin shares a fantastic impersonation of Jay Leno that you don’t want to miss.

If you enjoyed hearing from a world-renowned jazz musician… you’ll love our Musician’s playlist. I’ve sat down with Journey’s Jonathan Cain, two-time Grammy winner Lauren Daigle and legendary entertainer John Tesh. I also sat down with viral country star Walker Hayes for episode 146 to talk about “behind the scenes” of country music but also about life, loss, love, sobriety, failing and trying again. I’ll have the link to all of these conversations at JohnOLearyInspires.com/podcast.