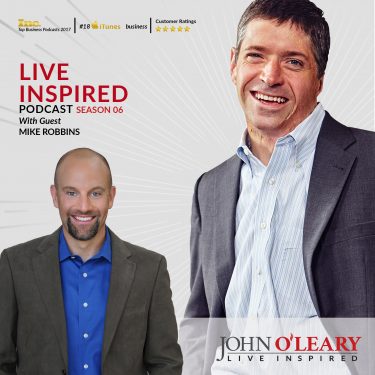 “Gratitude is a muscle we have to continue to build.”

Mike Robbins is the author of three books with a fourth out later this year. He has been featured in Forbes, the Wallstreet Journal, the Washington Post, Oprah radio network, ABC News and is a frequent contributor to the Huffington Post. Mike also has a successful podcast and speaks to clients which include: Google, the NBA, State Farm, Chevron, the San Fransico Giants, Harvard University, and many more. He teaches emotional intelligence, teamwork and leadership.

At the age of 17, Mike was drafted by the New York Yankees and turned them down in order to go to Stanford University. There he focused on playing baseball and getting a quality education. Once out of university, he was picked up by the Kansas City Royals, only to suffer a career-ending injury a few years later. He has lost his mother, father, and a sister to cancer.

Yet, Mike is grateful every day. He is an inspiration and champion of conquering adversity. His positive attitude, motivation to keep moving forward, and ability to escape the “trap of comparison” is a lesson for all of us.

Today, Mike Robbins joins us to talk about his family, hardships, successes and how he maintains gratitude throughout it all. This is a podcast you won’t want to miss.

1. What is the best book you’ve ever read? Don’t Sweat the Small Stuff and It’s All Small Stuff by Richard Carlson. Richard was one of the kindest and most authentic people I’ve ever met.

2. Tomorrow you discover your wealthy uncle shockingly dies at the age of 103; leaving you millions. What would you do with it? It’s amazing I was just thinking about this the other day. There is a part that wants to take care of everyone close to me. I thought about this for many years. I don’t think I would do anything different. I would think “how can I best serve?”

3. Your house is on fire, all living things and people are out. You have the opportunity to run in and grab one item. What would it be? My computer. It has access to all the photos and videos.

4. You are sitting on a bench overlooking a gorgeous beach. You have the opportunity to have a long conversation with anyone living or dead. Who would it be? There are a whole bunch of people that come to mind. The one that pops into my mind is Alexander Hamilton. I’d love his perspective on what is going on in our country right now.

5. What is the best advice you’ve ever received? Chris Anderson said to me once, “the most important job you have is to teach your daughter how to love herself. Love yourself, let her see that you do, and that is how she will learn.”

6. Looking back, what advice would you give yourself at age 20? Just relax. Enjoy this as much as you possibly can.

7. It’s been said that all great people can have their lives summed up in one sentence. How do you want yours to read?  Be the change you wish to see in the world.

Thanks such a motivational and inspiring conversation. Thanks!
Antoinette