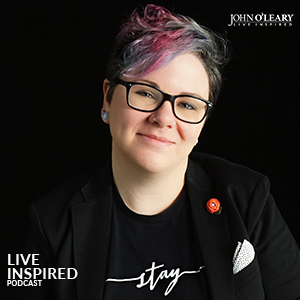 John O’Leary welcomes Dese’Rae Stage, photographer + 2-time suicide survivor, to the Live Inspired Podcast as she shares how her Live Through This movement is offering support and saving lives.

Nine years ago, if you’d searched for a community of suicide-attempt survivors, you couldn’t have found one. Our guest Dese’Rae Stage knows because she looked and, when her search came up empty, decided to do something about it.

Dese’Rae is a photographer, two-time suicide survivor, just shy of having a Ph.D. in suicidology and psychology and the founder of Live Through This. She created this movement to capture portraits and stories of suicide attempt survivors and in doing so – change the conversation, culture, and resources around suicide prevention, awareness, and support.

In a season where suicide is on the rise (it’s predicted that by 2020, someone will take their own life every 20 seconds), Dese’Rae is doing something about it. Join our important conversation.

1. What is the best book you’ve ever read? Perks of Being a Wallflower by Stephen Chbosky.

2. What is a characteristic or trait that you possessed as a child that you wish you still exhibited today? The persistence to seek out the things I am curious about.

3. Your house is on fire, all living things and people are out. You have the opportunity to run in and grab one item. What would it be? It would have to do with photos.

4. You are sitting on a bench overlooking a gorgeous beach. You have the opportunity to have a long conversation with anyone living or dead. Who would it be? My wife. She’s my favorite human being and we teach each other a lot. The older you get, the more complicated life gets and you don’t get to have those moments as much as you used to. I would always welcome more time just talking to her.

5. What is the best advice you’ve ever received? Just keep going and trust your gut.

6. What advice would you give your 20-year-old self? Your life is going to be a lot more interesting that you could have ever hoped for.

7. It’s been said that all great people can have their lives summed up in one sentence. How do you want yours to read? She did good stuff.